(Excerpt from a forthcoming chapter in Mental Health For Millennials, Vol 2 (publication date of October 2018)

‘A panic is an episode of intense fear of abrupt onset, usually peaking within a minute. The fear, often bordering on terror, is generally accompanied by unpleasant bodily sensations, difficulty in reasoning, and a feeling of imminent catastrophe’. (Rachman, S & De Silva, P, 2010, p2) 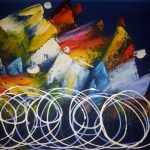 People associate me with my work on anxiety, panic and suicide prevention. I have developed a considerable amount of expertise on these areas over the years, both in a professional capacity and on a personal level. Anxiety related disorders are very common in modern day society. In fact, millions of people experience anxiety related symptoms at some stage in their lifetime. It is possibly the most common mental disorder and there are several categories of which I will talk about further on in this chapter.  Anxiety and panic are fearsome experiences for the majority of people, however, learning to cope or how to manage your anxiety is very possible. The good news is that it takes time, awareness, compassion with the self, along with the necessary self-care tools learned in therapy or otherwise. I am living proof of this. At the request of my editor, I agreed to be very open and vulnerable by giving an actual account of my experiences in the hope of helping other people that might be going through something similar at this point in time or in their past. I have had feelings of hopelessness, despair, low self-esteem and low self- worth. I reached out for support which, in turn, changed and saved my life. My main objective in my life presently is to help others that are struggling daily and to reassure them that thoughts and feelings change. Hang in there, utilise the services available and seek out necessary therapy. That’s my message.

My panic attacks occurred unexpectedly and often, as frequently as one or two per week. So on top of the actual anxiety, I had developed a fear around the reoccurrence of a panic attack. I feared blacking out as I had fainted on a few occasions after major ones. Each and every panic attack was extremely frightening and I remember having absolutely no control before, during or after. I felt helpless, extreme terror and very fearful. The ultimate fear I had developed was that of death. I feared dying because each time I took an attack, it felt like I was going to die. Although my panic attacks went on for a considerable amount of time, they became less frequent nonetheless I still experienced major episodes of anxiety. It took hold of my life and I had reached the point where I had contemplated ending my own life. I just wanted the pain, fear and anxiety to end. I longed for the end of the turmoil and uninvited interruption of my life. I had no control of my life, I could feel that agoraphobia was beginning to emerge so the thoughts of having being left with no other choice but to end my existence seemed somewhat very appealing to me at the time.

It all began with a traumatic event that occurred in my life as a teenage girl. I came to the realisation that I was suppressing a huge amount of anxiety back then because I was encouraged to pick myself up and dust myself off. I recall feeling very alone and isolated. I sensed that people looked at me differently and I became very quiet. I was attending college when I develop alopecia. I had patches of baldness throughout my scalp. It became my daily routine to disguise the patches so much so that I got used to it.   My hair eventually grew back after a period of time. I had been to many physicians and doctors and taking into account my history, not one of them suggested it may have been stress related. I lived a normal enough life, I furthered my education, and I experienced various employment opportunities in companies. I was married at the age of twenty-six. I had a little girl one year later. She was around three months old when I had my first major panic attack.

I recall my first major panic attack vividly. I was feeding my baby girl on a Sunday evening and suddenly I began to perspire profusely. My breathing changed and I felt extremely hot, nauseous and dizzy followed by an acute chest pain and heart palpitations. I remember thinking that I was going to die of a heart attack. I left the baby down safely and I called for my husband. The panic attack lasted for at least fifteen minutes which seemed lengthier. I had blacked out in the middle of it. A short time after I had come around, I felt exhausted and I was trembling uncontrollably. I experienced another panic episode a while after and I was taken to hospital as I was unsure about what had been happening and naturally I was very worried.   There was a series of tests carried out and cardiac issues were ruled out. Although I was relieved to hear this at the time, the fear and anxiety remained with me. I had convinced myself that there was something more sinister going on with my body. The second major attack occurred in my work place. It had been three months since my last one and I was working on my computer when all of a sudden I felt dizzy and couldn’t catch my breath. My heart began to race and again I had a tightening sensation in my chest. I went to hospital.   The hospital had my file and they were aware that I had attended previously with similar symptoms. I did a stress test a few days later and nothing showed up relating to me having an issue with my heart. They x-rayed my lungs and conducted various different tests. Then the consultant suggested that I may have had panic attacks and told me to visit my general practitioner to organise an assessment. I did attend my G.P. on numerous occasions and I found this to be a helpful support. Nevertheless, I seemed to be in a constant state of anxiety resulting in me being hyper sensitive to people and my environments. I was becoming fed up of waiting for my next imminent panic attack, it was around this time I had thoughts regarding the ending my life. It seemed like I was seeking out permission to end it all.   As I am writing this I can feel surges of emotion emerge from inside of me as I realise how far I have come on in life especially in the management of my anxiety. I allow for this feeling to occur in this present moment and it passes and I can continue with my story. My doctor recommended that I try some acupuncture treatments as it seemed to work well for some people with anxiety related issues. I went to an acupuncturist/therapist and she was very helpful. She put my mind at ease by providing me with information about panic attacks and she actively listened to me and helped me to learn to how relax as a coping mechanism. Over time, I went to twelve sessions with her and I felt much more at ease and I began to get my confidence back again. It seemed like a slow process but it was very effective and I was very hopeful.

On reflection, at the time, I felt very lost, desperate and full of anxiety, as I had no knowledge about panic attacks or what was actually going on with my mind or my body. Today, I feel an abundance of gratitude for having had the support of my family, general practitioner, alternative methods and learned coping skills/tools throughout. Today I am managing extraordinarily well.   I have learned so many different strategies on how to manage feelings of anxiety. I have also learned that there are warning signs unique to me prior to a panic attack. I have since gone down the psychology route and obtained a degree in psychotherapy & counselling. I see clients regularly and I feel both humbled and amazed that most of my clients have anxiety related issues. It gives me the greatest pleasure to witness vulnerability, growth, hope, wellbeing and good self-care during and throughout sessions. My message to people is to not lose hope. There is light at the end of the tunnel, you will be well. It takes time, support, compassion and energy to get to that space. Do not despair, reach out for support in a safe environment with a qualified and accredited therapist. You will reap the benefits of your personal development work