The Value of Sport Participation to our Teens

The Value of Sport Participation to our Teens

The Value of Sport to our Teens. 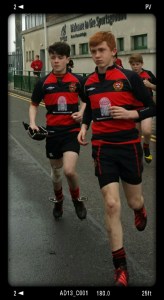 I’d normally include quite a few academic and research references to my posts but in this case, I’m just going to make a few personal observations. Today, I attended the Final of the Under 14s Connacht Cup in rugby at the Sportsground venue in Galway, Ireland. My son, Conor, was playing full back for his local team called Monivea against long time rivals – Ballinasloe – a team feared throughout the west of Ireland as they are good. Really good.

Now, Monivea hadn’t won this particular Cup since 1993 so that’s 23 years of waiting with lots of young lads from all over our region not getting the opportunity to ever play on a winning team. That’s a lot of young lads. But, the sun always comes out and, this morning, it did so again as Monivea beat Ballinalsoe 19 to 10 points. Last year, Ballinasloe beat Monivea so the tables had been turned. That is, for me, the absolute beauty of sport. But, the day was much more than about winning a little silver Cup.

We live in an era sociologists refer to as hypermodernity. It’s characterised by uber wealth (for some), uber technology (for some), uber consumerism (for some) and uber narcissism (for all too many!). Way too many of our children and teens are obese as marketers cleverly get them to sit for hours on end in vacant living rooms the length and breadth of Ireland and, indeed, other countries. They pile on weight that they then find enormously difficult to shift as they become older teens and young adults. But, by then, the marketers have moved on to convincing this population that they ‘need’ to chase other sedentary pursuits. The cycle is repeated.

So, how to get young lads out training and playing sport in the west of Ireland where the norm is rain and hail on dreary Saturday mornings and mid week evening training sessions? How can we convince young lads that playing sport is so crucial to their well being – physical and mental? Why on earth would a gang of spotty, pale youth relentlessly trudge out onto the fields of Sligo, Galway, Roscommon, Mayo and Leitrim with their jerseys stuck to them with the cold rain?

It seems to me that the HSE could do worse than appoint specific sports appreciation officers to attend every rugby, hurling, football, camogie, soccer, basketball, volleyball and hockey game to name but some sports, in an effort to convince the families, as there were younger brothers, sisters, aunts and uncles in attendance today that sport is for LIFE. It’s a habit that, like smoking, is hard to break once the kids get into it, embrace it, love it. Sport is crucial to our teens’ mental health because it builds a sense of identity, a sense of camaraderie, a sense of belonging to something more than oneself – the whole. Our teens feel so alienated from society and sport is one place they can return to being wanted, needed, valued by their teammates and club.

I love the fact that Monivea RFC don’t yet have a formal club house with warm showers, a reception area, a bar and training fields all on one site, as so many other clubs do. Our young lads get togged out in Shipping Containers. Yes, I am not joking. And yet, they bring a sense of pride to their jerseys that would rival any rugby team, in any Province with the best of facilities. They played with heart this morning for themselves, for each other, for their families and friends in the Stands watching and for, of course, that little silver Cup.

And, we won. More than a Cup. So much more. So here’s to the coaches who give up their free time, the officials who maintain some sense of order, the parents who encourage the lads to tog out and to the lads themselves who, this evening, have a profound sense of accomplishment. Not because they won the silver Cup of Connacht but because they challenged themselves and did it. #lovesport #loverugby More featured articles at www.thedoccheck.com