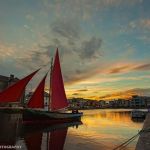 It became calm, almost serene as finger prints prodded the dryly moist mobile phone screens. Everyone was wondering, even disbelieving that it could happen. A hurricane had never occurred in Irish people`s life times before. An eerie stillness enveloped the warm atmosphere that was closing out the weekend on that memorable October evening right before Hurricane Ophelia hit the green isle on the west coast of Europe.

In 2008 we never waited. We were delirious as we rode on the wave of a never ending flowing cash flow. We felt impenetrable, untouchable and bragged at our ever escalating economic growth. Overnight, the wave broke and the crash came. Many panicked, more worried.

Those that panicked had bought houses of clay and were now left with young Irish princesses and princes of the tides expecting more from landlords ‘because they were simply worth it’. The majority never pitied these property tycoons as they had enough in the ‘good times’.

Those that worried did so for years to come. They adopted a slender attitude of looking out for themselves and struggled along once the flow of the tide had disappeared. Either way, our egos had crashed against the shoreline and made a severe chink in the rock of Irish economic armour.

When hurricane Ophelia hit, our southern counties felt it first. Due to warmer-than-normal waters and a cooler upper atmosphere the Munster province was firstly struck. Developed over another European nation of Portugal it triggered Ireland into its first severe weather alert in history. Ophelia`s savagely attacking personality bled 120,000 Irish homes of electric power and gave them a view of their fore fathers darkness in times of havoc. She powered large and destructive waves onto Ireland`s coast line resulting in flying debris and potential mass destruction of buildings and homes. Her vigour ended the lives of three innocent people and frightened tens of thousands more whilst scaring a nation into being covered indoors. Fear swept the Munster province where Brian Boru once ruled. Fear of more deaths due to an ever growing amount of homeless people on Irish streets and fear of falling trees, that ironically if better utilised, could help to construct weather resistant housing.

At her first battering ground in county Cork, a Church had part of it`s roof torn from its place of worship. A nearby football stadium at Turner`s Cross had it`s stand collapse when they were hoping the same week would see them crowned champions of the country instead. A school in Douglas had it`s gym roof ripped off and school children all around the country were told to stay away for two whole days. Trees collapsed, seventeen in all on the Centrepark road, along with hundreds more which did damage across the capital of the south.

The crash that shocked Ireland in 2008 following the world recession changed lives. The hurricane of Ophelia took them.

In 2016 Britain voted to leave the European Union. Rather than British people voting to leave the European Union for economic reasons, instead they wanted to leave because of their sense of values. By leaving the EU Britain was forecast to strain their political relationship with the United States of America. Further shock waves rippled around Europe with the impending decision to leave. For her little neighbour Éire feared a negative impact on her financial implications were about to come knocking.

Not long after hurricane Ophelia had gone the heightened awareness of the power of the weather was still in the Irish mindset and within days we were prepared for Storm Brian`s onslaught. Brian lived up to his promise in parts. His character reference was identified as he gushed even more fear into people`s psyches. This time, man made sand bags were at the ready as havoc was expected. The resultant bursting of the Shannon banks proved that his visit was memorable, but no one lost a life.

Brexit gave Irish people a shudder and a reminder to keep on economic course. Brian threatened to expose Ireland to what we were not ready for, but alas we were.

As a nation, old Éire has experienced its sudden and shocking setbacks in recent years and as people we have in the main, survived. As the unknown outcome of Brexit looms, let us take comfort in knowing that when a hurricane comes we can stay indoors for a while and pause in patience just like we did after 2008.

The continual fears of the fallout from Brexit are just that, fears. Like a storm Ireland is bracing itself for the worst outcome economically with government officials standing by and comparing it to a storm by possibly exclaiming in anxiety ‘ Somebody should have warned us’.

When the real impact of Brexit hits let us know that what does not kill us this time will make us stronger as a people in the eye of but a manmade storm.